Big Wins on the Horizon for AFADs and Road Workers in British Columbia and Ontario! 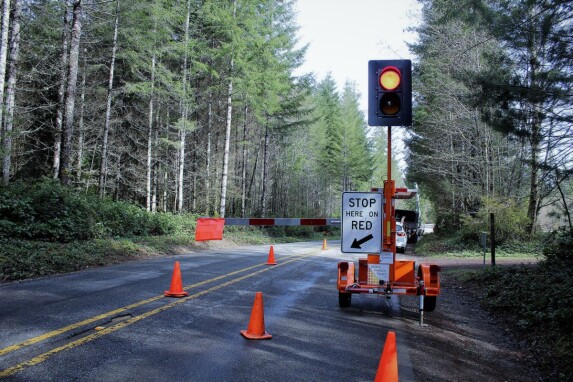 There are some big wins on the horizon for Automated Flagger Assistance Devices (AFAD) and road workers alike in British Columbia and Ontario at the moment.

On December 1, 2021, a number of amendments to the Occupational Health and Safety (OHS) Regulation in British Columbia came into effect. Among them are a number of changes to sections of Part 18, which relates to traffic control, that were passed by WorkSafeBC’s Board of Directors in July 2021.

In 2020, the provincial government implemented a number of changes to the Traffic Management Manual for Work on Roadways, a document that outlines fundamental principles and guidelines for traffic management and traffic control with the goal of protecting workers and safely and effectively moving road users through work zones.

These regulatory amendments to the OHS “align the provisions on worker health and safety in Part 18 of the OHS” with the above legislation, improving safety for workers who help control  traffic in and around work zones by eliminating or minimizing worker exposure to traffic in work zones.

In the event that elimination is not possible, the legislation now stipulates that worker exposure to traffic must be minimized by applying control measures such as temporary traffic control devices to protect workers, as well as outlines specifications for the placement of control devices towards the same end—a major victory for BC’s construction industry!

On October 22, 2021, a new regulatory amendment to the Moving Ontarians More Safely (MOMS) Act was proposed by the Ontario Ministry of Transportation (MTO).

This legislation, which was implemented on July 1, 2021, is a major victory for Ontario workers. While the majority of media coverage focused on the imposition of stricter penalties for stunt driving, the bill also includes a number of provisions to improve safety conditions for commercial truck drivers, cyclists, and road workers in the province.

The proposed amendment would implement the new AFAD provisions included in the MOMS Act, providing additional protections to road workers in the province by modifying Regulation 606 of the Highway Traffic Act (HTA) which establishes the guidelines for portable lane control signal systems on roads and highways.

These new provisions will define the minimum specifications for permitted devices, signage, and location of AFADs in temporary work zones, including required measurements, configuration, illumination and visibility requirements of the signal lights and control arm, as well as additional sign requirements on and around the work zone.

At this time, the tentative proposal stipulates that each AFAD be equipped with one red signal light, one flashing amber signal light, and one control arm, with minimum sign requirements including “a DO NOT PASS sign, a warning sign indicating signals ahead, and a sign indicating the location at which a driver approaching an [AFAD] is to stop their vehicle.”

The provincial government predicts no impact to businesses, non-profits, or the greater public sector, as the legislation states that no contractor is under obligation to use AFADs.

While, in some cases, road authorities may elect to “make [AFAD use] a condition of a construction contract,” the cost incurred for the devices “could be passed on by contractors in their bid price submission to the road authority.” For more detailed information on the regulatory impact of the provisions, visit Ontario’s Regulatory Registry here.

From November 19, 2021 to December 10, 2021, the MTO consulted with the public on questions of colour, size, and other factors to refine their proposed regulatory changes. As the leading design-manufacturer of AFADs and passionate advocates for road and worker safety, we are anxiously awaiting the outcome!

Get Ahead of the Game

For more than 25 years, North America Traffic has been the leading design-manufacture of Portable Traffic Signals and AFADs, serving our industry with innovative, focused, and safe traffic control solutions. We are prepared to meet increased demand and protect Canadian workers. Visit our website to view our line of flagging devices, request a quote, or find a NA Traffic dealer near you!