Why do we skirt around the real issues underlying worker safety? 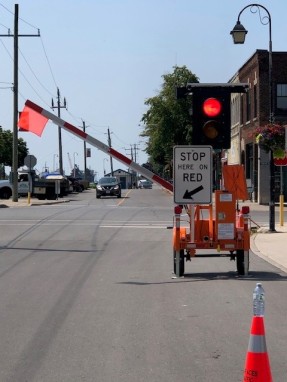 Why do we skirt around the real issues underlying worker safety?

Road workers are injured and killed at an alarming rate. There is a solution, and it’s right in front of us.

In my day-to-day bombardment of social media and email marketing messages, I probably read the word “safety” a few hundred times per week. The world in which we live in seems to pose endless threats to our safety – some serious, others edging closer to the side of paranoia. Nonetheless, safety is a word which cannot, and should not be taken lightly – sometimes our lives depend on it!

When I was a kid, I grew up in a time and place where the word ‘safety’ wasn’t part of my daily vocabulary like it is today, but even on a small scale, my elders back then were perpetually trying to keep me safe. Wearing shin pads while playing soccer. Zipping up my coat on cold winter days. Moderating sugar intake to avoid an upset stomach (I think my parents had some other reasons for that one!). Some pretty basic measures for me to take to avoid potential consequences that were unpleasant learning experiences more than anything.

However, some actions were taken to address situations that were much more serious in nature. Buckling up before the car starts. Holding my parents hand in a parking lot. Wearing a life jacket while swimming in the lake. The consequences of ignoring or short-cutting these measures were severe, and potentially life threatening. Don’t wear a seat belt, chances are I’m going through the windshield in a collision. There was no negotiation with my parents – the seat belt was mandated as a rule – and in fact, as parents, it was their RESPONSIBILITY to enforce this rule each and every time we got in the car. The only action they could take to show that they wanted me to be absolutely safe, was to make a rule using the safety devices available, and ensure that the rule was enforced each and every time.

To me, there are distinctions between levels of safety that determine how absolute an outcome will or will not be. What is the worst case scenario, what are the potential consequences, and how likely is it to happen? In my soccer example, if I don’t wear shin pads, the worst case scenario would be a kick in the shin, with the consequences being pain, with a high likelihood of occurrence. I can try to avoid being kicked in the shin as a work-around, but that will likely negatively affect my performance and enjoyment of playing. I could pull my socks up to my knees to protect my shins, but socks aren’t as protective as shin pads, so it will still hurt if I get booted. It’s obvious – if I don’t want the pain, wear the shin pads.

More of the same
Of all the stories I hear of road workers being killed on the job, one recently came across my desk that especially stood out, not just because it was yet another unnecessary loss of life, but because all the answers were right there in the article – a solution to the problem in front of everybody’s face. The article speaks to a 58-year-old construction worker who was struck and killed in a work zone in Pasadena, MD. I won’t go into the detail of the entire sad story, but here are some (frustrating) quotes from the State Highway Department that stood out;

If the victim was my father, brother, employee, or friend, I could not accept these comments as logical explanations as to why this incident occurred. Here, State officials are acknowledging the severe and known danger associated with the job. They’re confirming that drivers are becoming more and more dangerous and less attentive behind the wheel. And perhaps the most shocking quote implies that a human being of a couple hundred pounds, stationed in a vulnerable position, is responsible for ‘stopping and slowing vehicular traffic’ – hundreds of pounds of steel travelling at high speed. The investigation, as the article states, “can take up to a year to review by diagramming the accident, reviewing a lot of the evidence, and compiling the information”. What will that achieve? A life is lost. A report will be written and filed. Status quo remains.  And this will happen again, guaranteed.

Are the industry’s current safety measures meant to simply give us a sense of safety, or are they absolute, tangible, tried and tested methods that will avoid the worst-case scenario EVERY TIME, and mitigate the consequences with certainty? A reflective vest might make us feel safe, but it’s not going to stop an SUV hurling towards us at 90 mph.

According to Maryland’s State Highway Administration, “…there were six fatalities in 2016 and nine in 2015. That same year nationally, 1,000 people were killed, many drivers and passengers…” One fatality is too many.

It’s time for our decision makers to act as my parents did when I was a child and make it their responsibility to come up with ways to ensure that our workers are absolutely safe when working on the job. Technologies and solutions exist, they are simply ignored, or are an inconvenient pursuit. There should be no need for memorial funds, or foundations to honor the dead and support the families they leave behind. It’s obvious – if you don’t want workers to die in work zones, get them off the road.