The Rise of the AFAD 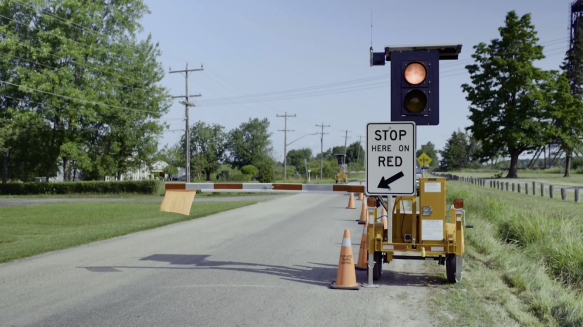 Automated Flagger Assistance Devices first hit the North American market over 25 years ago. The go-to-market strategy was two-fold – improve worker safety, and realize cost savings through labor efficiency. The heart of the concept was in the name - “Flagger Assistance” - and was never designed to be a replacement to flag-persons.  Flag-persons are injured and killed every year by rogue vehicles illegally or dangerously entering work zones, and something needed to be done to absolutely get flag-persons and traffic control operators out of harm’s way. AFAD’s are a mechanical device that can be used as an alternative to a Stop/Slow paddle by allowing one operator to control two-way traffic in one lane, but from a location off the roadway using a remote control. The general unreliability of humans was a challenge for contractors, and being able to mitigate the risk of employee absenteeism was partially satisfied by the AFAD as well.

The challenge has always been marrying three key stakeholders in this AFAD space – Manufacturers, Road Authorities, and End-Users. All have self-interests, yet at the same time have the desire and obligation to meet the needs of the industry.

Manufacturers of traffic control equipment live a very challenging existence. Most traffic control products are disruptive in some way – they shake up norms and introduce new ways of doing things, often challenging legacy methods. This is key to the progression of the traffic control industry. But a balance must exist between having a product that actually solves a problem, and forcing something on a market that doesn’t want it. Consequently, manufacturer’s need to (of course) present the market with a solution that isn’t cost prohibitive relative to current standards, while at the same time maintain their own reasonable profit margins. Finally, product specifications vary widely and must be adhered to by regional Road Authorities. Product uniformity becomes a near impossibility in this regard, and the never-ending battle to standardize specification ensues. Consequently, the temptation for manufacturers to push their product as the de-facto standard is always a top priority, yet ultimately does no service to the market.

“Reinventing the wheel” is a phrase I often think of when I think of the role of a road authority when implementing traffic control standards on projects. Repeatable specifications ultimately equate to consistency in areas like project plans, budgets, and tenders. If I were a road authority, my focus would be on efficiency and consistency.  Government bodies have a tendency to be slow by nature – often bottlenecked by budgets, staff turnover, and political influence. At the same time, those making decisions that impact our public construction and infrastructure projects have a mandate to explore the best avenues to do work that is safe, cost effective, and with technological excellence in mind, no matter how much it disrupts the normal flow of business.

The industry has changed and evolved. “Smart” work zones are here, unsafe work zones have finally become unacceptable, technology has advanced exponentially over the past decade, bodies to perform work are becoming scarcer, and connected and autonomous vehicles are clearly taking the lead as “the next big thing”. And in the middle of all of this industry advancement, AFAD’s – a mature product on the product lifecycle curve – have pushed to the front of the pack over the past 3-5 years as a product that hits all the marks that our industry needs currently, and for the future. Safety. Cost savings. Technologically advanced. Smart.

Every single product on the planet should be built and developed with the end-user at top of mind. I think of the famous Bill Gates vision of having a computer on every desk and in every home. It was a bold idea and most thought it an impossibility. This bold vision was 100% end-user-focused. It required an extremely finite understanding of what “every home” looked like. What a massive target market! Similarly, to what an “every home” demographic looks like, the demographic of end-users in the construction world is almost endless when we consider age, education, gender, race and disability to name a few. In addition, you have projects occurring within a maze of prevailing climates and geographic diversities. This throws a major curve ball into the world of AFAD’s in terms of application. What is the best product to suit the industry? The answer is; it depends. And as you’ll read below, the questions in 2022 are increasing as we all try to make sense of where we’ve been, where we’re at, and where we’re headed. At the end of the day, the end-user is the one using the product and the one in the trenches, and it’s for this reason that they will ultimately dictate what the best suited product is for the application at hand.

As a manufacturer of both AFAD’s and Portable Traffic Signals for nearly 30 years, the questions that our company is receiving in 2022 are surprisingly those of confusion. The slumbering market has woken up and want to know what this AFAD thing is all about. Where can I use them? How are they operated? What do they cost? Do they replace my flag-people? Do they actually work? This is good news for our industry! Lo and behold an established product already exists that can meet the needs. The challenge is deciphering what has become a messy world of products that aren’t exactly apples to apples in design or application.

There is a clear difference between AFAD’s and Portable Traffic Signals. Using just the MUTCD as a guideline, these differences have been evident and enforced for quite some time. Putting aside nuance, here are the 2 main differences:

1.An AFAD features a 2-section signal housing, or a 2-sided mechanical sign (stop/slow), coupled with a gatearm/stop-bar that raises and lowers in harmony with the signal lights. Red (stop), and amber (go/proceed with caution).

Portable Traffic Signals on the other hand essentially mimic that of a permanent traffic signal with a 3-section signal housing. Red (stop), amber (proceed with caution), green (go). They are typically larger in footprint than an AFAD and do not feature a physical stop bar.

2.AFAD’s cannot be operated automatically or left unattended. In other words, an operator MUST operate AFAD’s at all times. Think of an AFAD as a tool in lieu of a Stop/Slow paddle. Both require an operator to use judgement and real time observation to allow for safe traffic flow.

Portable Traffic Signals do not require manual operator intervention, and can be left to run unattended, communicating and cycling on pre-programmed timing settings. As mentioned, PTS’ are essentially a permanent intersection traffic signal on wheels.

These are the most high level distinctions to be made. As of today, there are no exceptions to these definitions for public applications. There is no such thing as a fully automated version of flagging in the AFAD world - by definition, an AFAD cannot be fully automated. Want to keep flaggers safe, reduce the number of flaggers required from 2 to 1, and be guaranteed to have your flagging operation show up for work? Then AFAD’s are for you! Want to get rid of flaggers altogether and have the ability to run traffic flow on projects that go for several months at a time? Then leap-frog the AFAD and get some Portable Traffic Signals that run on pre-programmed cycle times!

Our industry is peppered with new phrases today that were not historically heard in construction, such as smart technology, Internet Of Things, artificial intelligence, and machine learning. What do these terms mean? Oftentimes, they are contemporary buzzwords that really don’t mean anything specific, or do mean something but in an extremely broad context. When I hear “SMART” with reference to technology, I hear “data” and “network”. In other words, we have the ability to collect a lot of information very quickly and very cheaply, and are able to send/transmit that data instantly and compactly. What can we do with this information? In the traffic control world, we can predict things like traffic volumes. We can foresee and report equipment malfunction and failure. We can record and analyse crashes and intrusions. We can interact with drivers in an effort to help them make better decisions on the road.

Recall with AFAD’s what we’re really doing at the end of the day. What problem are we solving? Our goal is to control traffic using the safest and most cost effective means available to us, while our hard-working crews are repairing and rebuilding infrastructure, and hopefully, unconcerned with their personal safety being in jeopardy.

What is emerging as part of the line of questioning from Road Authorities and end users is understanding the differences between Smart Systems versus Construction Grade Systems. The difference between the two is quite significant actually. Smart systems might include features like video surveillance, network connectivity, data collection, remote monitoring capabilities, etc. As mentioned, Smart is the way of the future, and the ways in which we can use these technologies are beneficial and vast. The drawbacks to the market today would include (high) cost, susceptibility to malfunction, network (un)reliability, unproven technology, and end-user interface limitations. You might think that Smart systems would inherently be more beneficial to an end-user, but think of them like the latest car on the market that features all the bells and whistles.  More gadgets and gizmos to learn, and more things that can malfunction or break.

Alternatively, Construction Grade AFAD’s have a proven history of reliability, durability, and ease-of-use. They typically feature less moving parts and a more simplistic user interface that can be setup and operated by the most novice of end-user. They also feature a more digestible price tag, not having the breadth of features of a Smart AFAD. The main drawbacks would include the lack of technological innovation as part of the standard offering, limited in the range of data and interactivity available.

The Future Is Bright

Some DOT’s seem to be more forward-thinking and focused on the future. Same with end users. Others are still wanting to “go with what you know” and rely on proven, simple setups and technologies. With the massive infrastructure bill recently passed in the United States, reliable labor and cost control become as important a factor for contractors as ever. The challenge in the industry as the tidal wave of work rolls out will be figuring out how to take it all on, while remaining efficient and more importantly, safe.

Regardless of what type of AFAD end-users prefer, or Road Authorities approve for use in certain areas, traffic control automation is the way of the future and the more we as an industry can collaborate and educate ourselves on operational and application use, the better Manufacturers will be able to serve the needs of the market to drive home safety and efficiency. The future appears to be bright for AFAD’s!