A report on the increasing dangers facing Flaggers today

A report on the increasing dangers facing Flaggers today

Driver distractions have been around since automobiles were invented, but the number of distractions have increased dramatically when the smart phone came along. When we include distracted drivers with intoxicated and speeding drivers, the number of work zone crashes today are staggering. The increasing dangers have created an epidemic safety problem for Flaggers in construction work zones and there is no MUTCD Sections with Guidance clauses that protect Flaggers from distracted, speeding and intoxicated drivers, while standing at the edge of the roadway. The advanced work zone warning signs are positioned based on the safe stopping distance shown in table 6E‐1. The safe stopping distance does not apply to distracted, speeding or intoxicated drivers.

The current mood of the industry

Law makers can only do so much to improve safety by imposing heavy fines for distracted drivers using cell phones, driving under the influence (DUI) and speeding through work zones. ATSSA is doing their job to help shift the focus of transportation towards saving lives and reducing injuries. The Temporary Traffic Control committee, a sub‐committee of the NCUTCD, is working hard at improving the safety guidelines for construction work zones contained in the MUTCD and their efforts are always appreciated.

Many organizations have recently created national strategies to eliminate fatalities on our roads. The FHWA has created “Road to Zero”, ATSSA and AASHTO have joined together to create Toward Zero Deaths, and ITE has “Vision Zero”. The Toward Zero Deaths effort was first created by a steering committee cooperative which includes numerous organizations committed to reducing annual US traffic fatalities from more than 33,000 to zero.

Statistics show, that in the past ten years, there hasn’t been any significant reduction in the number of work zone crashes. Many innocent Flaggers, construction workers and motorists are killed or suffer serious injuries every year from illegal drivers entering work zones.

AGC of America is the leading association for the construction industry. With over 26,000 membered companies, AGC provides a full range of services satisfying the needs and concerns of its members, thereby improving the quality of construction and protecting the public interest.

This past August, I attended ATSSA’s 2018 mid‐year meeting, bringing more than 300 members and industry partners from across the United States together in Williamsburg, Virginia to discuss the future of the roadway safety industry. In his opening remarks to the general session, Mr. Stephen C. Brich, VDOT Commissioner said: “Distracted drivers involved in motor vehicle crashes in Virginia is an epidemic, and safety is the number one issue we are facing today… we had two flaggers struck by distracted drivers in two districts in crashes that occurred just days apart”.

After the morning general session, Mr. David Rush, VDOT Work Zone Safety Program Manager, spoke in more detail about the safety issues related to the increasing dangers. At the TTC committee meeting he said: “No matter how many advanced warning signs you install, distracted drivers don’t see them, and they don’t slow down … and when they don’t see the signs, they don’t see the Flaggers either.”

Here are some alarming statistics on work zone crashes presented by Mr. David Rush for the State of Virginia in 2017:

Here are two more slides from his presentation on National Distracted Driving Facts: 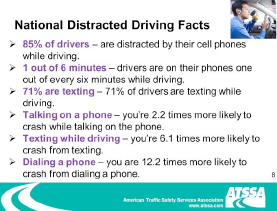 A Flaggers place of employment is now considered a Recognized Hazard

The Associated General Contractor’s report, along with the information presented at the ATSSA mid‐year meeting by high ranking VDOT officials, are serious safety concerns communicated by both sides of the industry and are not to be taken lightly. Their broadcasts are recognizing the fact that a Flagger’s place of employment is now considered a hazardous work place environment.

Reasons why a Flagger’s work place is a hazardous

The safe stopping distance applied in work zones for the placement of advanced warning signs does not apply to distracted, speeding, or intoxicated drivers. As per Section 6C.01, drivers will reduce their speeds only if they clearly perceive a need to do so.

I myself worked as a Flagger during the summer months while attending college. It is the most boring and thankless job on the planet, and the job comes with a huge amount of responsibility.

A Flagger’s primary focus is to make sure every motorist stops when and where they are required to do so. Flaggers get reprimanded for allowing a motorist to drive past for two reasons: 1) To prevent a head‐on collision inside the zone, and 2) To protect co‐workers when they need to work temporarily in the travelled lane. This responsibility causes a lot of stress. Whenever I thought a motorist would try to pass by me, I would walk out into the lane, in front of the vehicle, to make sure they stopped. I did this despite my Flagger training.

In Ontario, in 2014, an inquiry into the death of a flagger, Mr. Brian Daniel resulted in the Coroner’s Jury Recommendations aimed at preventing similar deaths.

One recommendation is to Amend the guidelines in Ontario’s Traffic Manual ‐Book 7 to require the use of AFADs, or appropriate devices for regulation/control of flow of traffic… on all highway construction sites with speeds > 60 km/h and < than 90 km/hr.

AFADs (Automated Flagger Assistance Devices) allow Flaggers to control traffic from a safe location, out of harm’s way from the travelling motorist. AFADs have been operating safely in Canada since 1994 and in the USA since 1995, under interim approval guidelines. In 2009, they were included in the MUTCD, after 14 years of State DOT experimentations.

For decades, British Columbia’s mountainous terrain has contributed to one of the worst safety records in construction work zones, even though they have an industry leading, two‐day Flagger training program. In 2015, BC introduced the Interim Traffic Management Manual (TMM). The Manual is used by Traffic Engineers in determining a Traffic Management Plan for construction projects.

In Section 5.2 – Use of Traffic Control persons (TCPs), it states;
Traffic Control Persons shall not control traffic within speed limits greater than 70 km/hr.

What speed can make the difference between serious injury and death?

In New York City, Queens Blvd., which used to be the most‐deadly area in the city, has had zero deaths since Vision Zero Network was implemented. (www.visionzeronetwork.org). In a CBC news interview, Julia Kite with the New York City Department of Transportation reported that ... “Evidence shows that when you reduce the motorists speed from 30 mph down to 25 mph there is a tremendous difference in a pedestrian survival rate.”

Based on Julia’s statement, a safe posted speed for Flaggers exposed to traffic is 25 mph. That’s okay if an injury to a Flagger is acceptable. The small number of Flagger injuries at this speed may not be enough to create a hazardous work place.

Why do we put Flaggers on the road in the first place? They still risk injury, even at slow speeds.

I’ve said for many years that if AFADs and Portable Traffic Signals were invented before the Flagger with a stop/slow paddle, would we ask our mothers, fathers, sons and daughters to go out there and stop traffic with this serious risk of injury or death? Never. In Europe they don’t use Flaggers, they use Portable Traffic Signals, and it’s no surprise, they have Zero Flagger Deaths.

Automated Flagger Assistance Devices have been around for 25 years, but the safety benefits they represent have yet to be widely recognized by contractors and designers of work zone traffic control plans. Portable Traffic Signals have been around for more than 25 years and their widespread use has been limited in Flagging situations. Mandating the use of these devices with new regulations is the only way we can achieve ZERO Deaths.

It is my hope that by putting together this report, a serious conversation can begin to consider updating Federal and State regulations and the MUTCD guidelines to better reflect the realities of Flagger safety today, and to working Toward Zero Deaths.

This section provides guidance and establishes procedures for States to manage the work zone impacts of individual projects.
https://www.law.cornell.edu/cfr/text/23/630.1012

Mr. David Rush, VDOT Work Zone Safety Program Manager Power Point Presentation;
Contact me directly and I can provide you with a copy

The following sections of the MUTCD reference work zone safety related to Flaggers: 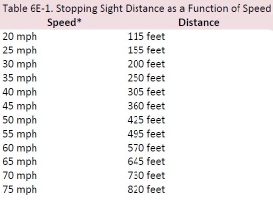 Section 6C.01 Temporary Traffic Control Plans
14 Reduced speed zoning (lowering the regulatory speed limit) should be avoided as much as practical because drivers will reduce their speeds only if they clearly perceive a need to do so.

The Standard for Flagger stations in Section 6E.08 states:
01 Flagger stations shall be located such that approaching road users will have sufficient distance to stop at an intended stopping point.
Option:
02 The distances shown in Table 6E-1, which provides information regarding the stopping sight distance as a function of speed, may be used for the location of a flagger station. These distances may be increased for downgrades and other conditions that affect stopping distance.

Section 6D.03 Worker Safety Considerations
Support: 01 Equally as important as the safety of road users traveling through the TTC zone is the safety of workers. TTC zones present temporary and constantly changing conditions that are unexpected by the road user. This creates an even higher degree of vulnerability for workers on or near the roadway.